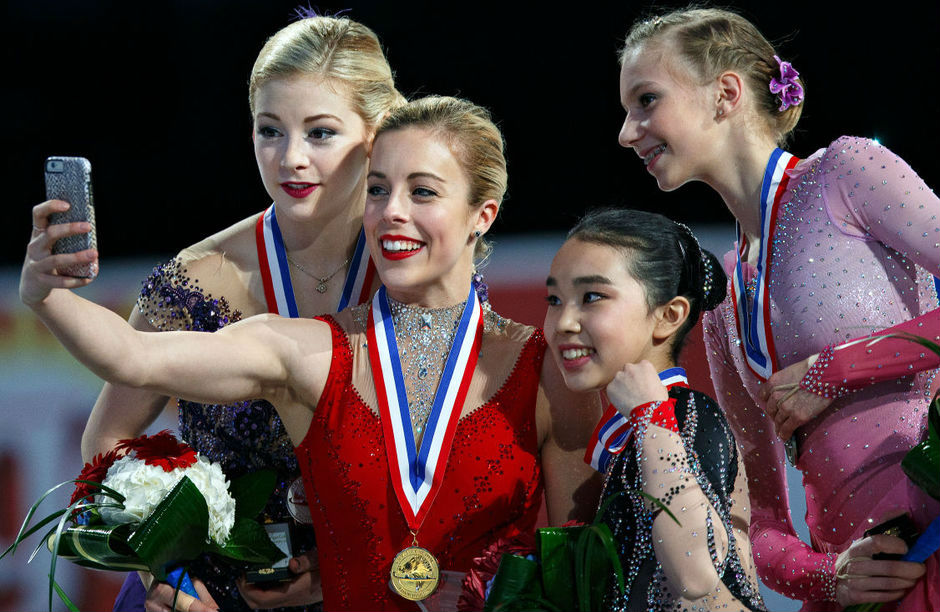 The 2015 U.S. Figure Skating Championships was amazing! There were so many spectacular moments in each of the events and I love just how much I continue to learn every time my family and I set down to watch these amazing athletes compete. With so much on the line, you can tell that each competitor has worked themselves down to the bones in preparation of this event. Some of them even coming back from injury like Gracie Gold. She is and will forever be one of my favorites! Although she wasn’t as successful this year while defending her title, she still gave an outstanding performance and she should certainly be proud of her hard work.

Another one of my favorite moments while watching some of the competitors was seeing Courtney Hicks who also skated fantastically. I was so impressed with her power and precision. I thought her short program was fierce and when I heard Jonny Weir tell Tara Lipinski “She beat the ice down and tore its weave off” I literally laughed out loud because it was so funny but true!  Courtney Hicks definitely earned her spot at Nationals and I certainly wish her all the best going forward and the commentators were correct in saying that she will be one to watch.

I can’t forget about Polina Edmunds, I thought she was technically brilliant as always. Basically she doesn’t miss a beat and she usually skates a solid program by landing all her jumps and executing each of her spins with sheer perfection. She had the little slip up and fell in her long program but she looked adorable as ever and will continue to grow in her technical skills and artistic abilities. The commentators had also mentioned that Polina is going through puberty and that even Polina said she’s glad it’s happening now and not later. As the Mother of a 13 year old soon to be turning 14, I thought, Oh Dear God this poor girl is having her puberty discussed on a National level! Then I quickly realized that she is embracing this season of her life and since she is not shying away from it and feels comfortable having it discussed then kudos to her.  I’m happy for her and that she’s embracing the fact that she is growing up and becoming a woman. I’m sure there are other little girls that may be encouraged by her candidness.  Best wishes in all you do Polina and keep shining bright!  Just a quick side note, I can remember when my Daughter Bethany was going through a “growth spurt” and she lost her scratch spin. Her Dad and I were like what the heck is going on!!? How does this happen? Thank God for coaches because our coach explained that these things can happen when a skater’s body changes and they start to grow, getting taller and leaner.

Next, we all enjoyed little 15 year old Karen Chen who stands all of 4-foot-10 inches tall. She is just a sweet special treat and I could watch her skate all day long. Not only was she adorable but she was a little power house and I’m so happy for her figure skating achievements. This is especially true since she’s not even old enough to compete in this year’s Sr. World Championships, which is the next destination for all of the 2015 U.S. Championship winners. Congratulations Karen! You looked amazing and I love your spunk!

I saved the best for last because she truly is in a class all by herself and that is none other than Ms. Ashley Wagner!! So very happy for her and I must give her one big giant “You Go Girl!!“  Her victory in winning her third U.S. Figure Skating Title is just amazing and we are so happy for her. Ashley was “unstoppable” and she was perfect in everything she showcased from her awesome custom made dress’s to her show stopping performances. Her power and determination was evident in each jump she landed and throughout her choreography. She was literally skating from her soul and it showed!

Ashley was coming back to the ice from so much negativity and criticism from many directions and no matter what side of the coin people were on last year in terms of their opinion of her, no one can deny that Ashley is a true champion because she has proven that by earning a third U.S. Figure Skating Title. I love what Ashley was quoted as saying when she told the commentators “ I’m so endlessly in love with this sport”. This is so awesome because you have to be in love with a sport like this to skate against all odds. Especially when people are telling you that your too old or all washed up. A person has to have a lot of perseverance to say I’m here to stay and I’m not going anywhere until I say so. Well, in so many words Ashley did just that by skating her way to a championship win during the 2015 Nationals. She is amazing and I wish her all the best going forward.

Lastly, congratulations to Jason Brown on winning his first U.S. Figure Skating Title, way to go!! =  )  I also want to congratulate Adam Rippon and Josh Farris. We are all so happy for you and inspired by your incredible hard work! Wishing you all and every competitor at Nationals the very best going forward.